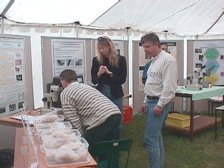 THE WOOL CRC’S Adelaide-based team displayed their research at this year’s Turretfield Wool Fair (18 and 19 of September). This celebration of all things woollen was organised and sponsored by SARDI (South Australian Research & Development Institute), Michell & Co., Elders, The Woolmark Company, Christine Rogers Interiors, University of Adelaide and TAFE, SA.

School groups were the focus of the first day (Friday), while the general city public were encouraged to attend on the Saturday. Competing with the Adelaide Crows in the race for the AFL premiership dampened numbers slightly but organisers were generally happy with crowd numbers.

Staff and postgraduate students from Adelaide Uni and SARDI combined to present the Wool CRC’s Sheep Transgenesis Program to the public. Transgenic sheep and wool were on display, as well as semen and cultured embryos and follicles. Poster boards formed a backdrop of general information about the techniques used, and many staff members generously gave their time to talk to the public about the aims and application of the work. The involvement of Wool CRC’s Education Program was also important, given the strong educational focus of the first day. Potential undergraduate students were able to identify degrees and diplomas with a strong wool education focus only through universities such as Adelaide participating in the Education Program.

The effort received a good deal of positive comment, with many people appreciating the interactive nature of the displays, and the ability of the CRC people to explain the science in lay terms. Woolgrowers suggested the CRC should seriously consider presenting all our work in a similar style at wool field days, with Karoonda Sheep Fair being cited as an example.

What do other readers think? Please let us know.