An evaluation of any cooperative research centre (CRC) has to be undertaken within the context of the broad objectives of the Commonwealth’s CRC program which began in 1991. It aims to enhance Australia’s economic growth by improving the efficiency and effectiveness with which research resources are used. Specifically, the program facilitates a much higher level of cooperation by encouraging:

The Commonwealth’s funding of the CRC Program provides the incentive for parties to participate in individual CRCs and the framework which provides a cooperative approach to scientific research in Australia. Successive reviews of the CRC program during the 1990s concluded that it was meeting its goals and should be continued.

The Wool CRC’s overall objective was:

The four individual research programs and one education program had the following goals:

Program 1: “To develop genetic technologies that enable manipulation of important determinants of textile fibre quality, especially fibre diameter, and at the same time maintain or enhance other economically important aspects of productivity”.

Program 2: “To develop and commercially evaluate new technologies that increase wool strength and processing performance, especially in wools from Mediterranean and other production environments where there are dramatic seasonal variations in feed quality and quantity.

Program 3: “To develop improved understanding of a) he process of fibre growth and the impact of changes in follicle function on the physical structure and chemical composition of the fibre and its ultrastructural components, b) the relationships between fibre composition, fibre structure and processing performance and to assess the significance of these relationships of the development of new products and processing practices”.

During its seven-year funding period to June 2000, the Wool CRC received $15.5m from the Commonwealth Government and approximately $12.5m from industry, a high proportion of which was contributed by AWRAP on behalf of wool growers. In addition to its cash funding, in-kind contributions by core parties and supporting groups (eg. NSW Agriculture and South Australia R&D Institute) totalled around $40m, comprising the estimated cost of scientists and research facilities.

Although funding of the Wool CRC ceased in 2000, approval was received to undertake some final activities into an eighth year to utilise residual funds of approximately $500,000.

Towards the end of its seventh year, the Wool CRC, as part of its formal reporting to the Commonwealth, commissioned the BDA Group to conduct an independent evaluation of the benefits generated by the Wool CRC relative to the associated costs. Reporting in June 2000, the Group’s report stated:

The report also tested, under a range of assumptions, the timing and benefits arising from the Commonwealth’s contribution and concluded:

“The economic pay-off from the Commonwealth’s support is likely to be considerable”.

In preparing its estimates the BDA Group did not attempt to evaluate individual outcomes because of the difficulty of isolating the contribution by the CRC to specific developments and the level of subjectivity involved. The Group therefore adopted an ‘organisational approach’ in which an estimate was prepared of the impact of the CRC on the current and future rate of profit growth in the wool industry.

In addition to the formal evaluation at the end of its funding period, the Wool CRC was subject to major reviews by the Commonwealth during its third and fifth years. Reports from the reviews, which examined progress of outcomes against milestones as well as financial and administrative management, were extremely positive. The Year 5 Report concluded (in its overview):

“…the overall objectives of a cooperative research centre have been successfully meet … (and) … the review panel recognises the particular value of the Wool CRC in establishing and linking a single research ‘pipeline’ covering the full range of activities from farm production, through harvesting and processing. The presence of the CRC acted as a major catalyst in linking together researchers in these otherwise disparate disciplines and groups. It is unlikely that this coverage would have been achieved without the establishment of the CRC”.

The quote from the Year 5 Review Report illustrates one of the inherent difficulties in evaluating a CRC; namely, the evaluation of cooperation and the linkages that are established within and between research disciplines.

The overt outcomes can be readily stated. For example, for the Wool CRC:

Nobody would suggest that these outcomes resulted only because of the Wool CRC, but the Commonwealth’s funding and the collaborative structure it provided was a significant contributing factor. Moreover, there is no evidence to suggest that effective collaboration would have been achieved without the CRC structure. Collaboration can be seen from two perspectives:

FIGURE 1
The Wool CRC’s central position relative to the institutions and industry sectors it services. 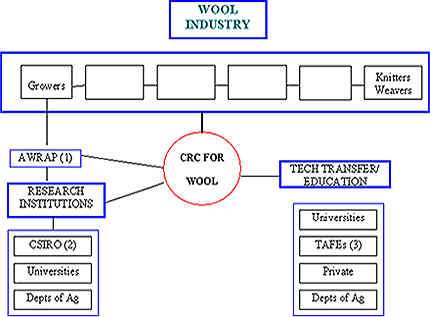 FIGURE 2
Within the CRC, the linkages established within and between the research programs and collective contribution to education and training. 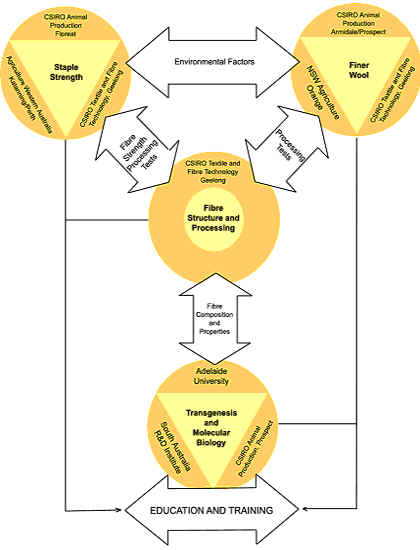 Among the more important subjective outcomes to which it is difficult to assign a value are the following:

1. The Wool CRC’s research program was based on a strategic seven-year plan that increased efficiency of resource use, avoided duplication of research effort and provided strong links between research teams.

all of which contributed to sharing of information, joint planning and as collaborative approach to technology transfer.

3. Cash funding injected by the Commonwealth and industry sources had a significant impact on decisions by research institutions to commit their own resources to wool research (a reverse effect has been witnessed as CRC funding ceased).

4. Strict accountability standards established by the Commonwealth have been instrumental in creating a disciplined environment in which high priority was given to efficient resource utilisation, technology adoption and monitoring of progress against milestones.

5. Arising from the emphasis on technology adoption, the Wool CRC has established a technology transfer framework within which the ongoing adoption of CRC technologies over future years is more assured.

Had there been no Wool CRC, wool R&D would have continued, but with less total resources, less efficiently used and with a further decline in education and training in the wool sciences. The wool industry is significantly better off as a result of the Wool CRC’s seven-year set of programs and it has set a precedent that will encourage ongoing cooperation in wool research. The measure of those net gains, however, will remain a matter of subjective judgement.