Environment interactions in Merino sheep
The University of Adelaide

Yamin is an overseas student from Indonesia studying for his PhD under the supervision of Prof Phil Hynd and Dr Wayne Pitchford from the University of Adelaide, and Dr Raul Ponzoni from SARDI Livestock Systems. A combined scholarship from the Indonesian Government and the Wool CRC is funding the program. Yamin already holds a Masters degree from the University of Queensland, in the field of Meat Quality in Beef Cattle. His PhD project is investigating genotype by environment interactions in Merino sheep particularly in relation to the impact such interactions have on fibre diameter variability in response to changing nutritional conditions. Yamin hopes to complete his studies by the end of July this year. 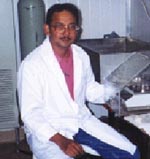 Variations in mean fibre diameter, in response to changing nutritional conditions and with age of the animal, present major problems for the production of high quality wool fibres, from the point of view of ‘blowout’ in fibre diameter and reduced staple strength. Unfortunately, the most productive sheep (genetically) are those that respond most to the environment, so that, for example, sheep with high estimated breeding values for clean fleece weights have greatest variations in fibre diameter as seasonal nutrition changes. Are there sheep which are highly productive in terms of clean fleece weight but which also produce fibres that vary little in response to changing environmental conditions? And how is it that some animals (eg those producing finer fibres) are less responsive to changing nutrition in terms of fibre diameter variation? These questions are being addressed in Yamin’s project.

Finer wool fibres in general contain a higher level of paracortical cells, which are distinguished from orthocortical cells in that they contain a higher ratio of matrix proteins to intermediate filament proteins. The former contain more cysteine residues and therefore these fibres have higher levels of sulphur, as cysteine is a
sulphur-containing amino acid. Yamin is testing the hypothesis that sheep producing these fine fibres are less responsive to nutrition because when more cystein becomes available (eg after the break of the season in southern Australia) they pump this additional cysteine into higher-cysteine proteins (the so-called ultrahigh sulphur proteins). This would mean that the cysteine cannot be used to produce more wool, just ‘richer’ wool. ‘Higher diameter’ sheep, in contrast, can respond to the additional cysteine because they either do not contain the genes for the ultrahigh sulphur proteins, or these genes are less responsive to the amino acid. It would be very interesting to know if there are sheep that produce low fibre diameter wools which are low in cysteine (sulphur) content, or that do not turn on their ultrahigh sulphur genes in response to nutrition. 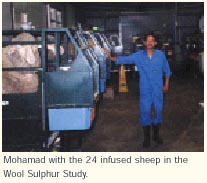 To test this hypothesis Yamin is examining the responsiveness of different sheep genotypes (in terms of fleece weight and fibre diameter) to cysteine infusion. The four groups selected were as follows:

The sheep were placed in metabolism crates and offered a low protein ration and then supplemented with a high level of cysteine (4.0g/day by intravenous infusion) for 21 days. Wool growth rate, fibre diameter, wool sulphur content, paracortex percentage, the level of expression of the keratin gene family, and the relative production of various keratin proteins in wool are being measured.

This research will help us to gain an understanding of the interaction between genotype and nutritional environment and the possibility of manipulating this interaction to reduce fibre diameter variability in highly-productive sheep.