The Wool CRC caught up with postgraduate scholar Joy O’Keefe at the University of New South Wales about her work on the effects of protein degradability of supplements on wool quality and quantity.

What’s your work all about Joy?

As I am interested in the area of sheep protein metabolism and the subsequent effects on wool growth characteristics, I have fed sheep genetically different in wool production a number of supplements with varying protein degradability in the rumen; and artificially increased the protection of canola meal using formaldehyde treatment. I have found that compared with unprotected canola meal, casein and the base lucerne diet, the protected canola increased clean wool growth.

Can you tell us some more about the actual experiment?

I used a base ration of lucerne chaff, fed at a restricted level so that the sheep steadily lost a small amount of weight during the course of the experiment. The protein supplements offered with the chaff were protected and unprotected canola seed meal. The method of protection used was formaldehyde treatment. The degree of protection of the supplementary protein varied but energy content and nitrogen value remained the same in the base ration.

There were nine sheep in each of the four groups, and they were randomly separated into groups of three. The experimental design was a Latin Square so that each group of sheep received each feed for a period of seven weeks: three weeks’ adjustment and four weeks’ measurement.

Nitrogen balance studies were carried out (see the sheep in the metabolism cage) in which nitrogen consumed was compared with nitrogen excreted in urine and faeces. These were done to test the assumption that the higher the degradability of the protein, the more nitrogen excreted and the less protein available for wool growth. 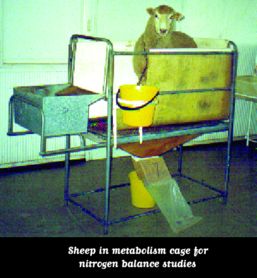 Wool growth rate of each sheep on each feed was determined using the midside patch technique.

Well, I don’t know if I would call it ground breaking just yet, but my work is unique for two reasons. First, the four lines of sheep (Fleece Minus, Fleece Plus, Strength Minus and Strength Plus) have never been compared in the same study; and second, it is one of the first studies to compare the established technique of autoradiography with the newly developed SIFAN technology for profiling of diameter variation along wool fibres.

Why are you doing this work?

To increase knowledge on the effect of protein degradability of supplements on wool quality and quantity; to determine the importance of protein quality on the wool growth and staple strength of sheep with genetically different potentials; and to evaluate methods of wool measurement.

Why is it so important?

In recent years considerable evidence has shown that the degradability of protein in the rumen can markedly affect the quantity and often the quality of amino acids absorbed in the small intestine, and thus have direct effects on the productivity of ruminant animals.

To date the majority of work on protected protein has concentrated on dairy cattle and the effect of lowering degradability on milk production. The formaldehyde treatment of canola meal used in these experiments should have increased the amount of protein by–passing the rumen. Thus, the wool growth of the sheep should be increased. The practical application of such technology in the wool industry will depend on the relative value of the wool and the protected supplements needed to boost its production.

Results from my experiments have shown that protection of canola meal can increase the clean wool growth rate.

Protected protein is protein which has been treated (usually with formaldehyde) to reduce its digestion by the micro-organisms which live in the rumen of sheep and cattle. By reducing protein digestion (degradability) in the rumen, more of the valuable amino acids in the protein can reach the small intestine and be absorbed by the animal. This can increase the efficiency of protein use, and can increase the production of meat, milk and fibre.

Who will benefit from your work?

If protecting a supplement increases the amount of wool grown and it costs considerably less than the input, then woolgrowers who currently supplement their sheep would benefit from this work.

Have you still got more work to do?

More work could be done with other supplements which may respond differently to formaldehyde protection.

What’s in it for industry?

The interest in various protected supplements is mainly determined by their price, but it should also be important to know how they respond to the protection treatment.

What’s in it for science?

More information on the value of protection; and SIFAN evaluation.

What role does the CRC play in your work?

As well as funding the project as part of the Education Program, the CRC has provided valuable advice and input via other CRC institutions and this is greatly appreciated.

Also, the Western Australian strength plus and minus sheep used in this experiment were generously supplied by Andrew Thompson (AgWEST Katanning/ CRC Staple Stength Program) following the completion of his studies at the Waite Institute in South Australia. Overall the collaborative factor has been a real plus.

Thanks Joy for sharing your work with The Wool Press. But before we sign off, is there anyone you would like to give a plug to?