“During the past two years at CSIRO Fibre and Textile Technology, I have learnt much about various aspects of wool science. Combined with the knowledge I gained from growing up on a sheep property near Hamilton in the Western District of Victoria, my time at CSIRO has increased my interest in wool science and technology.” 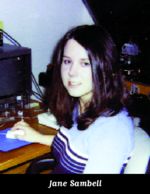 I COMMENCED WORK AT CSIRO after completing a Bachelor of Science/ Bachelor of Arts degree at Deakin University, Geelong. While at CSIRO, I have been involved in two Wool CRC projects. The first project examined the relationship between bundle strength of tops and intrinsic fibre strength. The second examined how the time of shearing influences the diameter of fibre ends in tops produced from wool grown in a Mediterranean climate. This project was taken through to skin comfort testing. The tests compared fabrics made from Western Australian and eastern states tops, some of which were shorn during autumn and others during spring.

The Wool CRC Scholarship has given me the opportunity to further my studies in wool science. Later this month I will begin studying for a PhD. in the area of Scanning Probe Microscopy (SPM) of wool. The work will be based at CSIRO Fibre and Textile Technology in Geelong.

The SPM is an important tool for imaging the surfaces of biological materials as it can be used under a range of environmental conditions to create three-dimensional micrographs with atomic resolution. The SPM can also determine adhesive, frictional and elastic properties of sample surfaces and if chemical groups are bound to the SPM tip, it can be used to map the chemical sensitivity of the surface to these groups.

Applying these methods of analysis to wool will help understand the effect physical processes have on the fibre. Of particular interest is the role of individual cellular components during dyeing, the effect of chemically treating wool for shrink-resistance and the changes occurring in wool that has been transgenically modified. The bending rigidity of fibres that have been modified to improve the comfort of woven and knitted fabrics will also be examined.