1. The Case of the Disappearing Wool Follicles

The quality and quantity of wool produced by adult sheep is directly related to the development of follicles in the skin during fetal development. Sheep which develop dense populations of follicles not only produce more wool, but also produce finer wool. It has therefore been the objective of many breeding and management programs to maximise the development of follicles in the skin. It was always assumed that all of the follicles which were initiated in the skin went on to produce a fibre. New research conducted by Dr Janelle Hocking Edwards, Lecturer in Animal Science at the University of Western Australia, challenges this belief.

“While I was in New Zealand conducting research into follicle initiation in NZ Merinos, I first noticed that follicles appeared to regress late in fetal life. There were a few reports which indicated that some follicles might regress before birth, but the evidence was flimsy. I decided to investigate this phenomenon when I returned to Australia and was appointed as part of the CRC Education Program team.”

This work was funded by the CRC through Program 1.

So, what is happening in the skin of these developing lambs and what relevance does this work have to practical sheep management? Firstly we need to understand the sequence of events occurring in follicle formation. This is illustrated in the accompanying photographs of fetal skin. 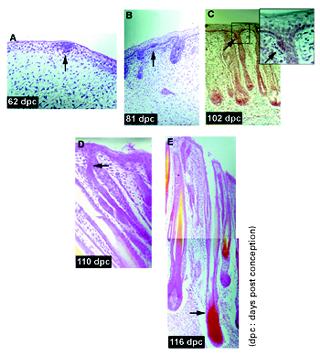 A developmental series of the Merino wool follicle.

A: The first stage of primary follicle initiation (arrow) is a localised thickening of the epidermis with an associated underlying aggregate of mesenchymal cells.

B: A wave of secondary follicle initiation (arrow) starts at about day 80 of gestation.

C: Secondary derived follicles (arrow) form as a bud or branch from the side of an existing secondary follicle at approximately day 100 of gestation.

E: At this stage the mature primary follicle (arrow) is positioned deep within the dermis and the fibre protrudes from the skin surface.

At approximately 40 days of gestation, the first (primary) follicles begin to form from the overlying epidermis. The follicle ‘buds’ grow down into the skin eventually forming a follicle which begins to form a fibre by day 90. These first fibres produce the characteristic birth coat of the newborn lamb. At approximately day 80 the first secondary follicles begin to form. They too grow down into the skin and generally, but not always, produce finer fibres than their primary counterparts. A third wave of follicle formation occurs from day 110. This wave involves branching of the previously-formed secondary follicles to produce follicle clusters not unlike the branching of roots in plants.

Measuring the density of follicles in sheep skin has always been difficult because the skin shrinks after it is cut from the animal. The degree of shrinkage varies from animal to animal and depending on the processing of the sample, so estimates of density are somewhat unreliable. This problem has traditionally been overcome by measuring the ratio of secondary to primary follicles (the so-called S/P ratio) which is independent of skin shrinkage. The changes in S/P ratio with fetal age is shown in Figure 1.

All primary follicles were mature at all stages of the study

S:P peaks at 135 days of gestation
S:P declines during the final fortnight of gestation
No effect of age on S:P after birth

From days 115 to 125 you can see that the S/P ratio increases rapidly. It was generally believed that the maximum S/P ratio was attained at about birth and that no further changes occurred. However, Dr Hocking Edwards has found that this is not the case.

“We were very surprised to find that the S/P ratio reached a maximum 16 days before birth and that after that there was a decline. About 25% of the follicles which had formed subsequently disappeared. This has enormous implications for wool quantity and quality. For instance, the relationship between S/P ratio and fleece weight at first shearing is very tight (about 90% of the variation in fleece weight is accounted for by S/P). This means that the wool growth in my lambs would have declined from their potential of 2.9kg to 2.3kg at first shearing. When one considers that at the same time the mean fibre diameter of the lambs would have increased due to fewer follicles remaining, the results have enormous implications for the wool industry.”

To identify the causes of this follicle regression, Dr Hocking Edwards plans to repeat the experiment with shorter intervals (four days) between samplings. The samples will be sent to a scientist in Germany to investigate the events occurring in the skin during this period of regression. Prevention of follicle regression by management of the ewes in this critical period will have a significant impact on wool quality and quantity in the future.