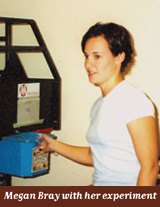 Megan is a graduate of Bachelor of Agricultural Science with first degree honours from the University of Adelaide. She commenced her PhD studies in 1998, having been awarded a University of Adelaide scholarship with a ‘top up’ from the Wool CRC. Megan’s project is investigating the partitioning of nutrients between meat and wool. Her supervisors are Prof Phil Hynd (UA) and Dr Dean Revell (UA).

Partitioning of nutrients between meat and wool

“In all animals there is continuing competition for the use of amino acids for the maintenance of body functions and for the production of important products, such as wool and meat in sheep. The way in which animals control amino acid partitioning between different tissues is not only an interesting biological question, but it also has important implications to the economic viability of animal production enterprises. Primary producers are striving to improve production efficiency and economic viability and, in the case of sheep production, this is heavily dependent on the relative value of wool and meat. The price differential between these two products is not constant, and hence some flexibility to switch the emphasis between primarily wool or muscle (meat) is desirable.

To investigate nutrient partitioning between muscle and skin, I selected sheep with distinct phenotypes based on clean fleece weight (CFW) and body weight (BW) parameters, that is, High CFW, High BW; Low CFW, High BW; Low CFW, Low BW; High CFW, Low BW. These unique phenotypes were selected from the Selection Demonstration Flock, based at Turretfield Research Centre, and enabled investigation into the regulation of partitioning between both CFW and BW.

Figure 1 demonstrates the large variation in BW and CFW across a typical flock and raises the questions:

The complexity of nutrient utilisation creates difficulties when studying the determinants of, and factors controlling, meat and wool production. It is proposed that these four phenotypes differ in the way in which they partition nutrients between the muscle and the skin, as a result of differences in:

The initial six to eight months of my scholarship involved the characterisation and selection of 60 sheep to form four distinct experimental phenotypes, with my first experiment conducted over the following five and a half month period. This involved daily feeding of the animals and diet determination, blood sampling for hormone profiling, wool growth rate measurement, faeces, urine and feed collection for nitrogen analysis, and animal slaughter and tissue collection for molecular analysis (ie. GH and IGF-1 mRNA and corresponding receptor mRNA quantification). The GH/IGF-1 axis was chosen due to its well documented anabolic effects and possible role in wool growth. 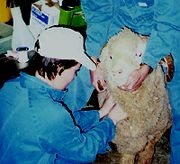 Experiment 2 will require the same selection process as explained previously. We are proposing that animals which differ in wool and meat production differ in protein synthesis and/or degradation in these tissues. Muscle and skin are both predominantly composed of protein, which is continuously synthesised and broken down at different rates. The balance between synthesis and breakdown determines the net amount of protein deposited in the end products and is quantified by tracer infusion using the arterio-venous technique, and muscle and skin biopsying. The selection of sheep for this experiment will be finalised in November, with the experiment itself taking place early next year.

Developing an understanding of the partitioning of nutrients to particular productive functions, namely wool and meat production, has very important implications to the efficiency of animal production, which ultimately affects the financial viability of sheep producing enterprises.”

The information obtained from this work may be used for improving selection criteria in breeding programs, or identifying ways to manipulate production by nutritional or pharmacological means.