2. Crimp – How important is it in modern wool? 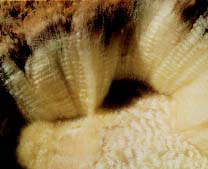 The crimp of wool, or the frequency of waves in a wool staple, has been a vital part of the selection of Merino rams and ewes from the early days. Dr Ian Purvis, manager of Program 1 has been studying crimp as part of the Fine Wool Project and reflects on its changing importance in modern wool science. This article is based on a report that he presented in the CSIRO Fine Wool Newsletter.

Before we had equipment that could measure mean fibre diameter accurately, crimp frequency (or quality number) was the most common means of estimating mean fibre diameter. In addition, many sheep classers were firmly convinced that fleeces should be true to a bloodline or stud “type” and, to be true to type, fleeces had to have a particular crimp frequency. So they attempted to create uniformity in crimp frequency. Sheep with fleeces that were broader crimping than they thought desirable for any flock were culled and so were sheep that were too highly crimped. Animals whose crimp varied across their body were also usually dispatched to the butcher.

Now that we have relatively cheap tests for diameter, breeders and sheep classers are facing the problem of what to do about the frequency of crimp. Does it still have a place in classifying wool? Do we scrap it entirely or is it important in the processing of wools of any particular “type”? An associated question is whether a breeder can maintain a particular crimp frequency and yet make acceptable changes to other characteristics of economic (and processing) importance.

The Fine Wool Project of the Wool CRC’s Program 1 is throwing light on these questions by giving us information about a number of issues related to crimp frequency:

First, let’s look at variability. If we take the nine fine/superfine bloodlines that form the Fine Wool Project flocks, and plot the average value for the hogget animals over five years, we see the differences shown in Figure 1a. The first thing to note is that these differences are surprisingly small. This is especially surprising when viewed against Figure 1b the range of crimp frequency found in the hoggets from any of the flocks which is very much greater.

Figure 1a. The relationship between crimp frequency and length of fibre in the processed top (hauteur) showing that the lower crimped wools produce tops with longer hauteur.

Figure 1b The relationship between crimp frequency and staple length showing that the lower crimped wools are associated with longer staples.

Now let us see what proportion of those differences in a typical fine wool flock is due to the effects of genes that will influence the performance of the next generation. This is measured by the heritability, and crimp frequency is moderately heritable (approx. 0.3), so selection for crimp will be reasonably effective if we decide that we want to change the crimp frequency of the flock.

However, we have done the calculations and despite concerns about changing crimp frequency in fine wool flocks, we conclude that selection that is focused on the major traits of economic importance within a flock fleece weight and diameterwill result in only very small changes over a period of, say, ten years. This conclusion applies only to fine wool flocks. If a ram from a medium wool bloodline is used – where, of course, the average crimp frequency is very different- there will be greater changes over this period.

Perhaps the biggest issue of all, these days, and certainly an important one, is the relationship between crimp frequency and processing performance. 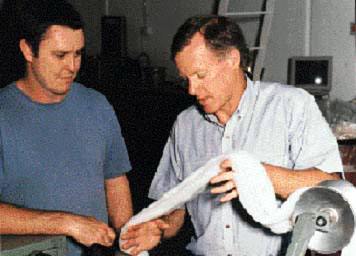 Studies have been conducted over several decades on crimp frequency and processing efficiency by the South African Wool Research Institute and by CSIRO Division of Wool Technology in Australia. In general, these results show that up to the topmaking stage lower crimped wools produce slightly longer fibres and have lower processing losses than wools of higher crimp frequency.

What do the processing results from the Fine Wool Project show us?

More than 200 batches representing the pooled fleeces of the progeny of individual sires have been processed through to tops at the Geelong research mill of CSIRO’s Division of Wool Technology. The results of these unique trials will let us predict with confidence the

One of the many raw wool attributes measured on the individual fleeces that formed the processing batches was crimp frequency. This information allows us to relate the average crimp frequency of a processing batch to the subsequent performance of that batch through to top stage. We were particularly interested in the hauteur, or mean fibre length in the top because it is has a big influence on the prices paid for wool tops.

As Figure 1a clearly shows, when crimp frequency increases, hauteur decreases. On the face of it, it looks as though lower crimp wools are clearly better than highly crimped wools.

But, we need to analyse this further.

These are preliminary results in a very comprehensive program but they are certainly important to producers of fine wool who are considering using crimp frequency as part of their selection strategy. I will be presenting further data in The Wool Press as they become available.