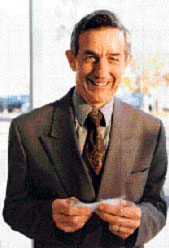 An Interdepartmental Committee has been set up by the Departments of Industry, Science and Technology (DIST) and Finance to look at ways in which CRCs can attract increased industry support and become less reliant on government funding. The Wool CRC has made a submission to the Committee and we said, for the wool industry at least, that there is a case for a greater contribution by the private sector to research and development, but some ongoing assistance by government is justified.

Industry support for the present Wool CRC comes almost entirely from growers by way of research contributions by the Australian Wool Research and Promotion Organisation (AWRAP) through IWS International. In the first four years of the Wool CRC, IWS funded projects to the value of roughly $7.6 million, compared to a Federal Government contribution of around $8.4 million. Nearly half of the IWS funds comprised Government money because of the dollar-for-dollar contribution by the Commonwealth to wool R&D expenditure.

Funds received from other industry sources during the period totalled around $50,000, of which the Wool Selling Brokers contributed $40,000.

Total payments by IWS to research organisations have contracted markedly over recent years. They peaked at $58.8 million in 1990-91, falling subsequently to $19.5 million in 1996-97 (see graph).

The Government’s share of wool R&D funding has averaged around 44%. Support for wool R&D by industry sectors is not known accurately, but is comparatively small and is either in-house or confined to a few joint projects with CSIRO and universities.

The case for an increased involvement by post-farm sectors in Wool R&D and education is not just about obligations and raising additional resources. In its submission to the Interdepartmental Committee, the Wool CRC listed additional reasons:

We can be sure, however, that private companies will not readily commit funds to a seven-year Wool CRC engaged substantially in strategic research. To gain industry support will require a more realistic approach. For example, we can provide a CRC framework within which to discuss with industry potential collaborative ventures that:

We could also encourage industry sectors to contribute jointly to specific projects rather than leaving it to the larger individual firms. Another possibility is that industry organisations such as the Australian Wool Exchange may contribute funds to R&D on behalf of the wool industry as a whole.

The Australian Mineral Industries Research Association (AMIRA) is very supportive of CRCs (it is directly involved in four of the 11 mining CRCs), but it also has called for stronger links between industry and the CRCs “to make them (the CRCs) work from the perspective of industry partners” (R&D review, March 1997).

AMIRA has drawn up a list of seven criteria that they believe are critical to the success of the CRC Program. There is no space to list them here, but in a nutshell AMIRA is saying that CRCs should be carefully and jointly planned by partners from research and industry with a strong commitment to the outcome. There should be a clear understanding of the expectations of each partner within a Board comprising strong representation from industry. They also argued for effective communication amongst the stakeholders and indicated a preference for the key research staff being able to devote a high proportion of their time to the programs.

The Wool CRC has submitted, however, that some continuing support from government is still necessary, albeit on a lower level. A major reason is that it acts as a financial incentive for the private sector to participate in a Wool CRC, but justification for that support is also provided by the:

The future of Government support for CRCs will soon be known. Hopefully, the recent rearrangement of portfolios that gives science and technology a voice in Cabinet will enhance the prospect of continuing Government support, but that will not diminish the need for much greater commitment by the wool industry.