7. Phil Hynd is new head of Animal Science in Adelaide 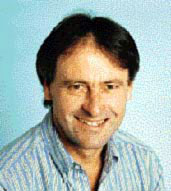 Professor Phil Hynd
The University of Adelaide has recently appointed Dr Phil Hynd as Professor of Animal Production to lead the Department of Animal Science in its move to establish the Roseworthy Campus as a major centre of teaching and research for the animal industries. Professor Hynd will be emphasising the importance of animal nutrition and the application of genetic biotechnologies to improved animal performance. These are both areas of expertise for which he already has an international reputation. He will be continuing his strong association with the Wool CRC and will maintain the research program and teaching program in which he and his students are presently engaged. In his role as Head of the Department of Animal Science, Prof. Hynd has made it clear that he is particularly keen to forge strong links with plant breeders to ensure that animal health and production are high on the list of the breeding objectives of pasture legume and grain breeders.